Soup: the Most Versatile Meal

Winter is officially here, but we have already had freezing weather and snow to usher in the season. And nothing is more soothing than to come in from the frigid outdoors to a steaming cup of soup. No wonder January is national soup month!

The best thing about soup is its versatility. Even if you live in a warmer climate and never see a flake of snow, chances are, you'd be just as happy to savor the flavor of a good soup.

Our romance with soup goes back to ancient times. As early as 20,000 years ago in what is now known as Xianrendong Cave, in China, people were enjoying soup. The pots found in the cave had signs of being heated over fire.

Even before cookware, scientists believe people made soup using animal hides or baskets woven from reed or bark - serving as early bowls. Rocks heated in fire could be used to boil the water.

These days soup is served in every environment from the most chic restaurants to the diner down the street. You can find recipes so complicated they make your eyes pop, or you can just pop a can. There is no food more accessible or, arguably, more enjoyable than soup.

There are a number of soups around the world that are enjoyed cold. Some examples are Spanish gazpacho, which features tomatoes and vegetables; Jewish schav, which contains sorrel; French vichyssoise, with leeks and potatoes; Danish buttermilk soup which is called kaernemaelkskoldskaal, and in Poland a soup featuring beets, sour cream, shellfish, and pickles, called chlodnik, is a favorite.

While some soups remain obscure, only enjoyed in their local regions, others have become famous worldwide. Bouillabaisse, a famed soup originating on the Mediterranean coast of France, featuring different fish and shellfish, has actually been the inspiration for writers; including a ballad by William Makepeace Thackeray in which he reminisces about an inn he frequented in Paris to partake of this delicious soup.

Another spotlight on soup in the arts was Andy Warhol's famous Campbell's Soup Cans paintings from 1962. At that time there were 32 different types of soup available from Campbell's and the paintings represented each of those flavors.

It's no wonder that soup has made it out of our kitchens and into our cultural consciousness. In addition to tasting great, soup has long been lauded for its health benefits. The craze for bone soup that took over a few years ago had people gulping soup to cure any number of ailments. And in just about every culture, from an early age we are told to eat chicken soup if we get sick. This has been hailed as a remedy dating back to the 12th century when Moshe ben Maimonides, an Egyptian Jewish physician and philosopher, praised its health benefits. In 2000, the ancient remedy gained new credence as we learned that chicken broth really can reduce inflammatory symptoms. It turns out Grandma knew what she was talking about when she told you to eat that soup! And so did Maimonides.

So if you are looking for an immune system boost, curious to explore the flavors from distant lands, or just want to enjoy a classic favorite that reminds you of home, surely there is a soup that will delight your whole family. Check out some of our favorites (and their recipes) here at the Right Choice For a Healthier You Food & Drink section. 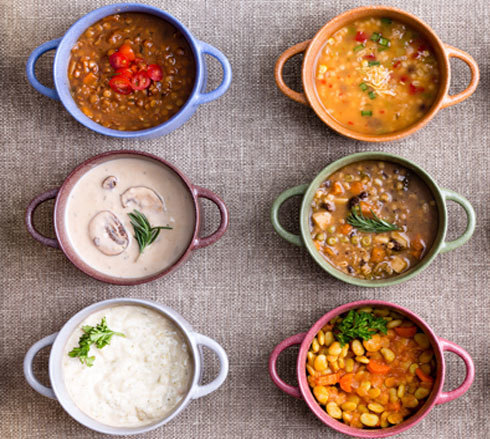